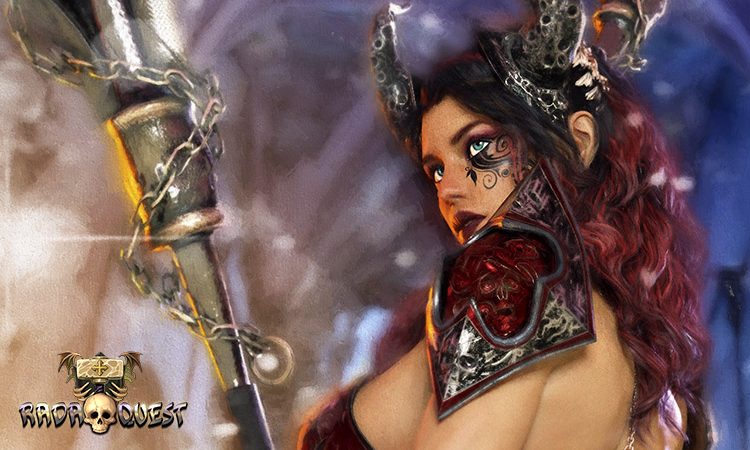 Yelia (Keeper of the Passage) Extended Version is a new illustration for the Rada Quest collectible card game. Rada Quest is a multiplayer online game that is still under development. The theme of the game are the adventures of epic fantasy, sword and sorcery. The illustrations on the cards recreate fantasy scenes with courageous warriors and beautiful sorceresses. There is also place for monsters. The game includes a real-time strategy system on resource generation, building construction and development of a skill tree. However, the main body of the game is the creation of a deck of powerful cards to compete against other players or against the creatures of the game at events.

You can buy this illustration at the official Rada Quest store. It is available in Ultra-High Definition format to be able to print in large format.

For the creation of this illustration I have used the following resources:

Farnan was not a warrior who was easily frightened but, at that moment, he felt his heart pounding in the chest. The silence barely broke with the whisper of his boots and those of his two escorts in his slow walk. He wielded the sword tightly, opening and closing his fingers around the handle from time to time, as if making sure that it is still there and will not fail when necessary.

For decades nobody had come down to the catacombs of the fortress and entered that passage. Too much blood stained the manuscripts that described what happened there. What had to be an exemplary penalty turned into a disproportionate punishment to the crime committed. But how to predict such violent consequences. She earned the nickname «keeper of the passage» because no one who dared to cross it came back to tell it.

But that was a long time ago. With the fortress besieged and about to be defeated, that passage was the only hope of evacuating the few survivors who still defended the walls. Farnan would make sure that the road was clear and that the exit on the other side of the mountain would bring the opportunity to live another day to fight again in better circumstances.

He tried to imagine what Yelia could do to be condemned to stoning in that passage and how that triggered in such massacre. Some say she sold her soul to some creature of the underworld. Others say that she was, really, one of those creatures.

A fleeting flash. His instinct forced him to duck and the air stirred over his head with a whistle. Two thud against the floor behind him. He didn’t need to turn back to take a look; the head of one of his escort rolled to his feet. The next noise was that of decapitated bodies collapsing lifeless. And then he saw her.

Farnan was paralyzed. He was afraid to meet a monster and before him was a woman of a gorgeus beauty, insolent, savage. Her blue eyes shone like stars in the dark. And they were fixed on him. With a movement of her hand she unbuckled a breastplate buckle and then it fell off, leaving her torso completely naked. Farnan felt hypnotized. She still held a two-blade scythe in one hand. Identical to the one she had thrown deftly against her guards, beheading them in one fell swoop. When Farnan realized that the scythe was beginning to move was too late. A flash of pain pierced his insides. The legs stopped responding and he fell to the ground, kneeling. He could barely feel the warm moisture of his intestines sliding between his legs. He couldn’t take his eyes off that fabulous warrior.

Yelia came over and knelt in front of him. She was so close that Farnan could smell her. That fragrance reminded him of summer afternoons, at the edge of a pond, resting on the grass. He felt comforted. Relaxed. Then she kissed him. A soft kiss on his lips. A sweet kiss through which his last breath of life left his body to enter hers.

Text and illustration created by @marcosdk for Rada Quest TCG 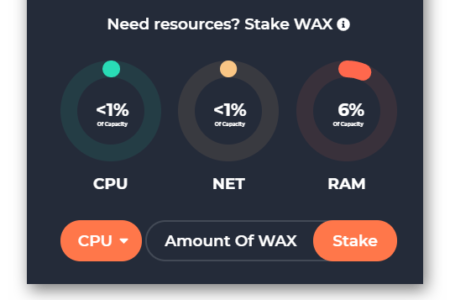 🔮Chowu is the special card of the day, Do you have this card in your inventory? it multiplies your daily rewards😱🚀

🔮Ayosani is the special card of the day, Do you have this card in your inventory? it multiplies your daily rewards😱🚀

🔥You can win prizes in $WAXP and $SC by playing in our weekly GEMS MINI-GAME tournament, the pool is divided between the first 3 places.

🔮Sylae is the special card of the day, Do you have this card in your inventory? it multiplies your daily rewards😱🚀

🔮Innua is the special card of the day, Do you have this card in your inventory? it multiplies your daily rewards😱🚀

This website uses cookies to improve your experience while you navigate through the website. Out of these, the cookies that are categorized as necessary are stored on your browser as they are essential for the working of basic functionalities of the website. We also use third-party cookies that help us analyze and understand how you use this website. These cookies will be stored in your browser only with your consent. You also have the option to opt-out of these cookies. But opting out of some of these cookies may affect your browsing experience.
Necessary Siempre activado
Necessary cookies are absolutely essential for the website to function properly. These cookies ensure basic functionalities and security features of the website, anonymously.
Functional
Functional cookies help to perform certain functionalities like sharing the content of the website on social media platforms, collect feedbacks, and other third-party features.
Performance
Performance cookies are used to understand and analyze the key performance indexes of the website which helps in delivering a better user experience for the visitors.
Analytics
Analytical cookies are used to understand how visitors interact with the website. These cookies help provide information on metrics the number of visitors, bounce rate, traffic source, etc.
Advertisement
Advertisement cookies are used to provide visitors with relevant ads and marketing campaigns. These cookies track visitors across websites and collect information to provide customized ads.
Others
Other uncategorized cookies are those that are being analyzed and have not been classified into a category as yet.
GUARDAR Y ACEPTAR